The cake and pastries made in Spanish convents are famous for their delicacy, the result of careful preparation and traditional methods. Many of the recipes, a legacy of the Arab presence in Spain, wisely combine almonds with honey and eggs and were brought to the convents by nuns who had learnt them in their homes. 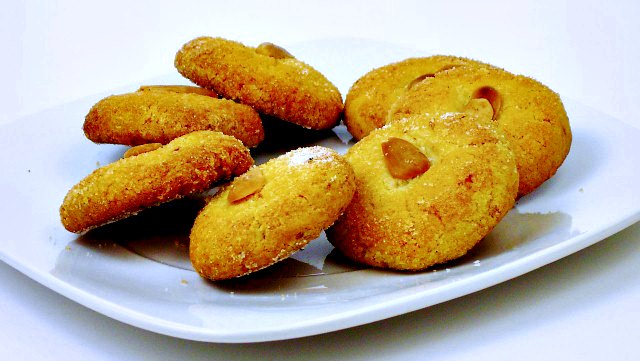 It is in the provinces of Seville and Granada that there are the most convents and where the products of their kitchens are most competitive with those on sale in the shops.

The following recipe comes from a Granada convent and is said to be a secret, but we happen to know it is included in a well-known publication.

Grind the almonds in an electric grinder with a little sugar to prevent them from going oily. With an electric beater, beat the eggs with the rest of the sugar until light and fluffy. (If done by hand, first beat the yolks with the sugar, add the almonds, etc. and finally the egg whites beaten stiff.)

Add the cinnamon and lemon zest then gently fold in the ground almonds. Grease and dust with flour 6-8 individual tart pans; fill them with the mixture and sprinkle with almonds flakes. Bake at 350 degrees F for 15 minutes.

Remove from the pans while hot and leave to cool.