During its long, arid summers, Andalucía cools itself down with chilled gazpacho, a hearty and pungent soup that has gained fame throughout the world for its amazing thirst-quenching quality.

Often described as a liquid salad, gazpacho descends from ancient Roman concoction based on a combination of stale bread, garlic, olive oil, salt, and vinegar. As Romans labored to build roads and aqueducts across Spain in the scorching heat, this creamy soup replenished them with the necessary salt and vitamins lost through physical exertion.

Later, shepherds and farmers added vegetables to make it more hearty and satisfying. Because tomatoes and bell peppers were not indigenous to Spain, these ingredients were not added to the soup until after Spain's discovery of the New World. Since that time, gazpacho has remained relatively unchanged - an unpretentious soup designed to quench the thirst evoked by the unrelenting Spanish sun.

Traditional Gazpacho. This is the most traditional and basic gazpacho recipe. If you've never tried gazpacho before, you should start by this one to appreciate the subtle differences amongst the different recipes we offer.

Green Gazpacho. Unlike the classic gazpacho recipes, this soup relies on spinach, lettuce, parsley, and mint for its freshness and texture. Although it is quite different from its more traditional gazpacho cousins, this version is every bit as refreshing. 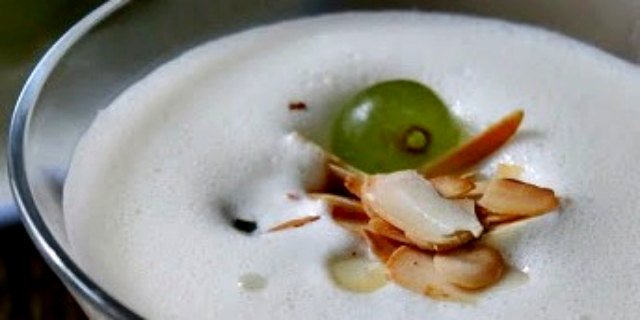 Ajoblanco, a white version of gazpacho, is believed to have originated with the moors. If a silkier texture is desired, try soaking the blanched almonds in milk before processing. This will enhance the soup's delicate creaminess.

Oriental Gazpacho. This dish demonstrates how each chef can put his own unique stamp on a gazpacho recipe. This particular gazpacho has distinctively Eastern undercurrents, as evidenced by the use of soy sauce, lo mein noodles, and rice vinegar. Not surprisingly, this blending of cultures yields delicious results!

Salmorejo. Similar to a traditional tomato gazpacho but richer and smoother, this delightful cold soup is typical of the Cordoba table. In Cordoba, they use dried country-style bread; plain rolls will also work.