Cardona, a medieval town close to Barcelona, is home to an amazing ninth-century castle that sits on a hilltop, dominating the local landscape. Luckily, Spain's state-owned hotel chain, Paradores, has renovated and modified the large castle, transforming it into a comfortable hotel. A visit to this magnificent place, which with its mazelike corridors is more like a feudal home than a hotel, will take you back centuries. The hostelry's dining room serves this memorable duck with pears, a classic of Catalan cuisine. 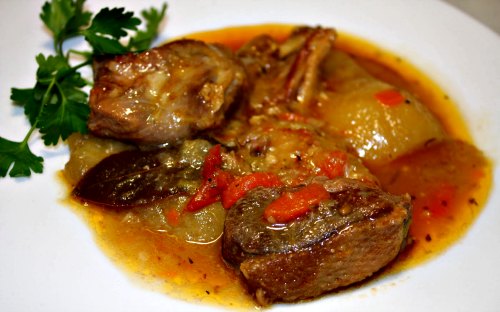 Rinse the ducks inside and out and pat dry with paper towels. Season the ducks with salt and pepper and then rub the outside of each bird with the duck fat or lard. Place the ducks, breast side up, in a roasting pan and roast for about 1 hour, or until golden brown. Transfer the ducks to a cutting board. Reserve the juices in the pan.

Meanwhile, in a saucepan, bring the stock to a boil over high heat. Add the pears and parboil for 10 minutes. Remove from the heat and set the pears aside in the stock.

Measure out 1/4 cup of the duck juices, add to a large cazuela, and place over medium heat. Discard the remaining duck juices. Add the garlic, onions, carrots, leek, parsley and thyme and cook, stirring occasionally, for about 30 minutes, or until the vegetables have softened and turned golden. Add the flour and stir to incorporate. Add the tomatoes and sherry and cook for 5 minutes longer. Remove and discard the thyme sprig.

Using a slotted utensil or tongs, transfer the duck pieces and pears to a warmed serving platter. Pass the contents of the cazuela through a food mill fitted with the medium plate held over a bowl. Spoon the sauce over the duck and serve hot.