This is the recipe that springs to mind to most people think of paella. While Valencia, the homeland of paella, rarely produces a paella mixing seafood with meat, this paella has caught the popular imagination outside Spain and tends to be the paella served in most Spanish-themed restaurants. 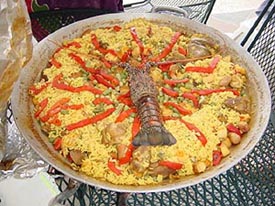 It's easy to understand why few could resist the combination of delicate lobster meat, mussels, clams, and shrimp teamed with rich chorizo sausage and tender chicken.

Scrub and debeard the mussels and clams, discarding any that don't close when tapped sharply. Set aside.

Heat 1/4 cup (2fl. oz) of the olive oil in a skillet. Add the pork, and brown all sides. Mix in the garlic, onions, tomato, and bell peppers, stirring constantly until cooked. Set aside.

In another skillet, heat a further 1/4 cup (2 fl. oz) olive oil and cook the chicken until browned on all sides. Season with salt, pepper, paprika, rosemary, thyme, and cumin. Transfer the chicken to a plate and set aside.

In the same skillet, cook the lobster claws overt high heat for several minutes until its shell turns pink. Set the skillet aside.

Preheat the oven to 200 ºF. Heat 4 tablespoons olive oil in a skillet, and sauté the rice until it's translucent. Pour in the chicken broth, and combine well. Add the pork mixture, stirring constantly. Sprinkle in the saffron and continue to stir until well mixed.

Transfer the rice into a paella pan. Mix in the lobster claws, chicken, chorizo sausages, mussels, clams, shrimp, peas, and capers, combining well. Bake the paella, uncovered, and on the lowest oven shelf, for around 25 minutes, or until all the liquid has been absorbed.

Discard any mussels and clams that have failed to open.

Serve the paella straight from the pan, garnished with lemon wedges.