Topping grilled fish with a spicy vinaigrette is one of the preferred ways to prepare fish fillets in Spain. It is specially popular in the Basque Country, where establishments known as asadores, basically grill houses, specialize in fish a la espalda, or "on its back", a name derived from cooking the fillets skin side down on a grill. Here I have used monkfish cut into medalions and pan searing instead of grilling and paired it with the same excellent vinaigrette. 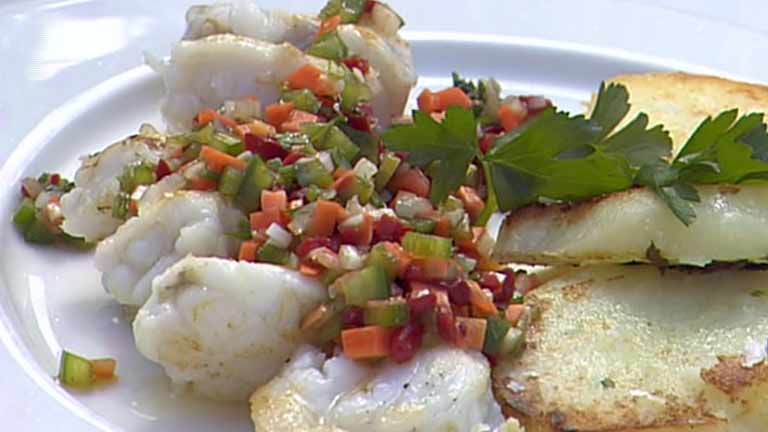 Cut the monkfish crosswise into 1/2-inch-thick medallions. Season the medallions on both sides with salt. In a small bowl, stir together 1/4 cup of the olive oil and the lemon juice. Brush the oil mixture on both sides of each medallion.

Heat a large sauté pan over high heat. Working in batches, if necessary, place the medallions in the hot pan and sear on the first side for 1 minute. Decrease the heat to medium and cook for 2 minutes longer.

In a small skillet, heat the remaining 1/2 cup olive oil over high heat. Add the garlic and red pepper flakes and fry, stirring constantly, for 1 to 2 minutes, or until the garlic starts to turn golden.

Immediately but cautiously add the vinegar, stepping back slightly in case the oil flares up. Remove from the heat and stir with a long-handled wooden spoon for 20 to 30 seconds to mix the vinegar with the oil,  creating a vinaigrette.

Pour the vinaigrette over the fish and garnish with the parsley. Serve immediately.

Basque Recipes: Basques live for cooking and eating. I haven't found a similar level of passion anywhere I have traveled. If we try to describe Basque cuisine, a fair answer might be that it is deeply felt, honors tradition, and respects the natural flavors of the ingredients. These qualities are on display in the significant number of dishes that are distinctively Basque. The international acclaim achieved by the new Basque cuisine movement led by Juan Mari Arzak is only the most recent example of how Basque cookery has influenced the tables of the rest of Spain and beyond