Typically Galician, Tetilla cheese is made from milk from herds of cows in the area, basically Friesians, Alpine Browns and Rubia Gallega.  Its flavour is creamy and slightly salty, its texture is fine and its colour yellowish ivory, although undoubtedly its greatest characteristic is the peculiar breast-like shape that gives it its name (tetilla means small breast). 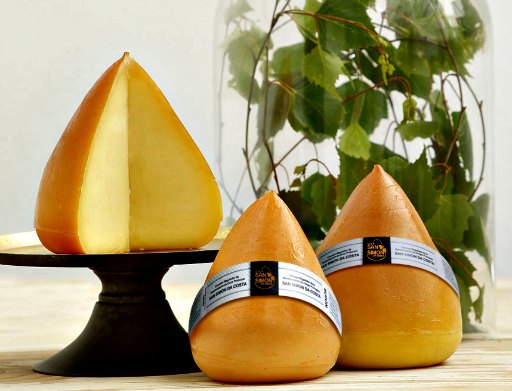 Originally, the master craftsmen modelled the cheeses by hand. It is curdled with animal rennet and its maturing, which lasts between 10 ad 30 days, is carried out in the cool, damp environmental conditions of the Galician climate. Its Designation of Origin has existed since 1992.

It originally began to be made in the central part of Galicia, on the border between La Coruña and Pontevedra, largely around Curtis, Sobrado dos Monxes, Arzúa and Melide. Nowadays, both the milk production and manufacturing areas include all Galicia, in the northeastern corner of the Iberian peninsula.