If you want to take a trip that's bound to leave a great taste in your mouth... If you're the kind of person who loves hearty local dishes and delights in the bouquet of world-renowned wines... If you enjoy going to food festivals... If you've always longed to take a route combining natural attractions and delicious recipes... And above all, if you'd like to know what a really great 'pintxo' tastes like... 2014 is your year, and Vitoria-Gasteiz (capital of Álava, in the Basque Country) is your city. 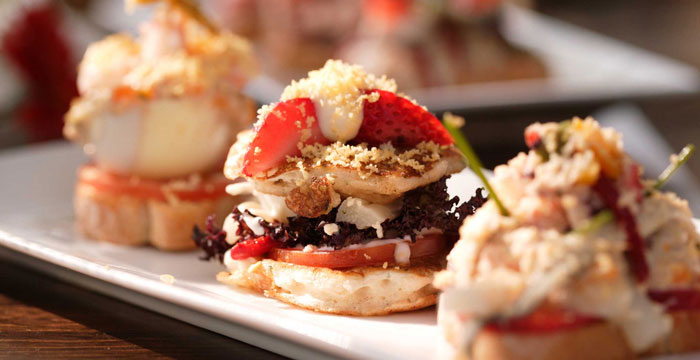 This year Vitoria-Gasteiz in northern Spain launches its 'special menu', and is laying on a whole range of original events including an 'Exchange of chefs' from various areas in Spain, the 'Vitoria Gourmets awards', the creation of a cookbook, the recovery of old recipes, gastronomic courses at the Gamarra Catering School… And what about you? How can you make the most of this treat for your palate?

It doesn't matter which month you choose to come to Vitoria-Gasteiz. There's always an activity to enjoy. Here are just a few:

January is the month of the Álava Black Truffle Fair (a unique opportunity to sample this delicacy).

In February we encourage you to take part in the Week of the Cazuelita (mini-casserole) and Rioja Alavesa wine.

March brings the Gasteiz On fashion shows, when bars and restaurants throughout the city prepare 'pintxos' (gourmet canapés) fit for the catwalk.

Don't miss the festivity of San Prudencio in April. You'll be amazed at the bands of drummers made up of chefs as they roam the streets. And of course, you must try the scrambled eggs with 'perretxikos' (wild mushrooms) and snails.

And from May to August the fairs and festivals come thick and fast. For example you'll be able to choose from among the Spring Honey Fair in Antoñana, the 'Wineries on the street' event in Labastida, Txakoli Day in Amurrio, the Azkena Rock Festival, the world-renowned International Jazz Festival and the festivities in honour of the patron saint of La Blanca.

And September is wine harvest time, and with it comes the Medieval Market and the Rioja Alavesa wine harvest festivities, so you can see for yourself how the grapes are trampled while you sample some exquisite wines.

And to round off the year, several important events: the Álava Pintxo and Rioja Alavesa Wine Week (you can vote for your favourite 'pintxo'!), the Aldoaraba event (featuring the best Rioja Alavesa wine, 'txakolis' and cider in the province) and the Night of the Candles, when 15,000 candles illuminate the city as you sample the popular hot wine.

Restaurants, 'pintxo' bars, 'asadores' or roast meat restaurants, delicatessens, establishment specialising in canned and bottled delicacies, cake and pastry shops (try the 'vasquitos' and 'nesquitas'), wine shops, show-cooking in the Mercado de Abastos market… you'll be spoilt for choice. Some of the prize-winning restaurants include Zaldiaran, Sagartoki, MarmitaCo and, a few kilometres from Vitoria-Gasteiz, the famous Marqués de Riscal.

And one more little secret. Provided you're invited by a member, you may be lucky enough to take part in a meal organised by one of the 'gastronomic societies' in Vitoria-Gasteiz, a tradition dating from the mid-19th century. A unique experience.

And if you have any doubt about what to order, here are just a few of the best-known products: D.O. Txakoli de Álava, D.O .Rioja Alavesa wine, Zalmendi, pinto beans from Álava, potato and honey from Gorbea, olive oil from Arróniz, cheese (D.O. Idiazabal), salt from Añana, Álava black truffle and Perretxiko wild mushrooms.

If you're the kind of person that likes to be handed it all on a plate, why not try some of the routes around the city?

The Rioja Alavesa Wine Route: you'll be able to hop on a wine bus and visit spectacular wineries like the ones by Frank Gehry (Marqués del Riscal) and Santiago Calatrava (Ysios).

The Salt Route: you'll visit the Salinas de Añana salt flats and enjoy the medicinal properties of brine at the Salino Spa.

The 'Pintxo-pote' Route: you'll tour a variety of establishments where you'll be treated to a glass of wine and a typical 'pintxo'.

Are you ready for more? Take your pick: the Delicatessen Route, the Wine Shop Route, the Sweet Route, the 'Txakoli' Route, the Gin Tonic Route, the Beer Route…