In cooking, Espagnole Sauce (salsa española) is one of Auguste Escoffier's five mother sauces that are the basis of sauce-making in classic French cooking. Spanish cooks use this sauce mainly for meat dishes, for making stuffed peppers, and for vegetable dishes in general. For example, it is an essential element of the old-fashioned patatas a la importancia. 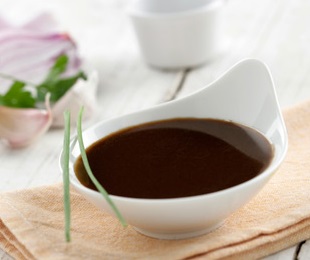 Add the water, sherry and salt, mix well, and cook, stirring occasionally, for about 10 minutes longer, or until the sauce thickens slightly.

Remove from the heat and let cool until tepid. Transfer the contents of the pan to a blender or food processor and process until smooth. If not using immediately, cover and store in the refrigerator for up to 1 week.