During the Christmas Celebrations almost everyone has tried with delight the turrones and all the very different varieties; without a doubt the consumption of turrón is intimately linked to the Christmas season in Spain and it could be said that turrones are essential in the menus of all these celebrations, because this traditional sweet was already reflected in the book "Conduchos of Christmas", written by Francisco Martinez Montiño, Head Chef in the kitchen of King Felipe II. 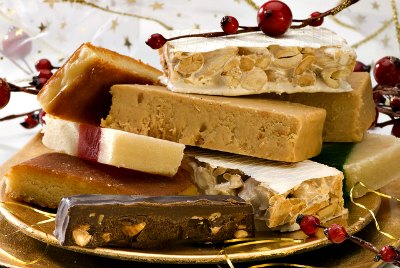 In this book we find the recipies of the elaborated menu to entertain in Alicante, an embassy coming from Japan during the Christmas of 1584. The menu included turrones of Jijona and Alicante The author shows a great surprise because their guests not only knew the turrones, they even admited to eat them in Japan every year where the "turroneros" from Jijona will travel to sell their product.

So it is such the prestige of these products that on 18th August 1939, the Regulating Council of the Denomination of Origin was created in Jijona. After, some changes took place on 20th July 1991 when the Regulation of the Specific Denomination of Origin of Jijona gave protection to the geographic names of Jijona and Alicante, applying to the turrón made of soft and hard almond respectively.

The way of elaborating turrones that was mentioned in Francisco Martinez´s book is:

"Turrones: they are very popular; the one of Xixona is a compound of almonds and honey well mixed and cooked together to the point. It is also made in hot pot and on stone like the chocolate made by hand".

The main ingredient used to elaborate these turrones is the Almond, being the most expensive ingredient and the one than takes part in greater proportion, determines the quality level and the price of the product. Of the varieties of almond the ones that are more used : Marcona, Planeta, Mollar, Mallorca and Valencia. The Marcona variety is the favourite. The almond is peeled off and is toasted until acquires the wished color, the Jijona variety requires a more toasted almond whilst in the Alicante variety, the almond should be less roasted. The one from Alicante is also made in Xixona and the almond is broken in small pieces instead of minced.