The Region of Cantabria is very rich in history, art and natural areas: the sea, valleys with mild and warm micro-climates, fertile pastures... the varied cuisine cleverly combines the products from the sea with those from the pastures and market gardens.

The high quality of Cantabrian milk goes without saying and therefore it is not surprising that milk derivatives are plentiful throughout the region. It is known that the inhabitants of this Autonomous Region were eating butter 2,000 years ago, when the Romans, the civilised people of those times, only used it as protection from the sun. For the Cantabrians, cheese is almost a religion. 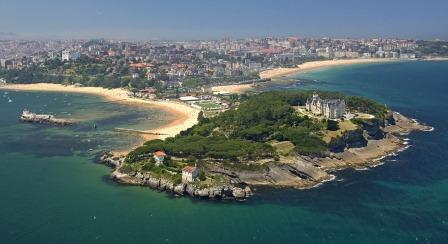 Santander is the capital of Cantabria

Strong-tasting cheeses which are cured with great care. Queso de nata (cream cheese) which can be found throughout the region, picón from Treviso Bejes, smoked cheeses, such as those from Áliva or Pido, and the small quesucos, which are made from a mixture of cow's and sheep's milk.

Fish from the Bay of Biscay

The Bay of Biscay supplies the Cantabria with some of its typical ingredients: fish and shellfish, which are of outstandingly good quality. The cold waters of the Bay of Biscay offer barnacles, spider crabs, small crabs, clams, meaty lobsters and very delicate crayfish and king prawns; the squid caught off the Bay of Biscay shore are delectable.

Sea bass, hake, scorpion fish, young sardines.. bonito which is used to prepare one of the most typical dishes of the region: "sorropotún" or "marmita", a fish stew similar to the Basque "marmitako", but with a character all of its own. Sardines are a typical dish served at fishing harbours and are normally baked and served on a simple wooden table. Some of the most famous Cantabrian stews also use ingredients from the sea: hake in green sauce, squid in ink with onions and clam stew.

Atún encebollado is one of the favorite recipes in Cantabria. Use bluefin Tuna (Atun) for this recipe to get the best results.

The importance of cattle

Bovine meat is very popular in Cantabria. One of the most popular is the lean and juicy Tudanca beef and the most important Spanish Cattle Trade Fair is held in this region: the National Trade Fair of Cattle from Torrelavega.

There are more types of meat. The quality of Cantabrian game is well represented by the venison, roe deer and wild boar. Pork, always present on mainland Spain, is the main ingredient of one of the most typical dishes of the region, the Cantabrian style stew, which also contains haricot beans, cabbage, and rice and blood sausage (morcilla) 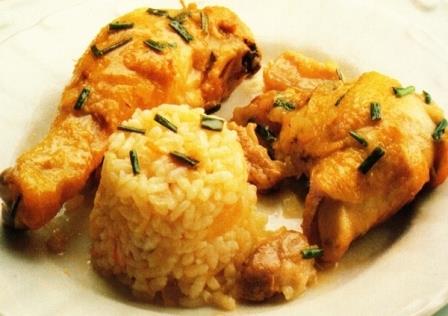 Pollo Campurriano: A dish from farming country inland from Santander. Well-powdered with paprika, the chicken is fried, then cooked with ham and peppers, and served with rice.

It is unthinkable to finish a meal in Cantabria without enjoying a dessert. The typical Cantabrian has a very sweet tooth and wherever the traveller stops to eat, he will be able to try one of the traditional cheesecakes of the Pas Valley.

Another typical product is pastry, and for which each area has its own name: "corbatas" in San Vicente de la Barquera; "polkas" in Torrelavega; o "sacristanes" in Liérganes. And, although they may not be originally from this area, due to the top quality of Cantabrian milk such desserts as custard, rice pudding and deep fried custard slices have become very popular. 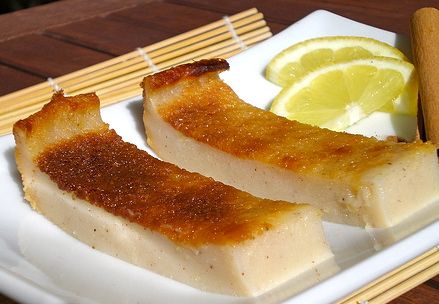 Quesadas are typical of La Vega del Rio, a rural village in the Santander province of Cantabria where the milk, cheese, and butter are exceptional. There is a saying that sums up the popularity of this dessert: si te vas a Santander y no pruebas las quesadas, tu te dejas lo mejor y viajaste para nada. (If you go to Santander and don't try quesadas, you are missing the best and have travelled in vain).

Wines and Drinks in Cantabria

To date, the vineyard is not very important to the Cantabrian community. Only Lebaniega conserves a few small vineyards and these are gradually becoming smaller.

The most traditional drink of the region is "orujo", a strong liquor which is prepared using old traditional methods, distilling it drop by drop. Those in the know say that "orujo" is an excellent remedy for indigestion